This month, officially I joined the regular cast of Second Tuesdays At Sids as door dame and singing performer. This month’s show, the one year anniversary show, was on July 10th. It’s produced and hosted by Shelly Watson at Sid Gold’s Request Room with Chris Johnson on the keyboards. Singing burlesque performers were Melody Jane, Emmy Crockett, and Kittyhawk Boone. Joe McGinty led piano karaoke after the show.

View behind the scenes photos and videos from this show. 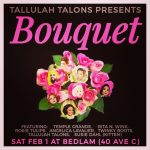 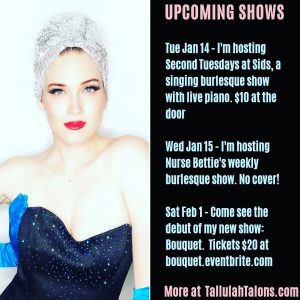 Tallulah has started building a show archive documenting cast lists and photos from the 70+ burlesque shows she's done since 2017. Check back often because new things are being added all the time