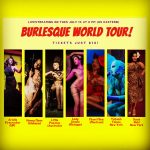 I'm just a Zoom call away... comment with your pre

Was life before lockdown even real?!

If you missed the live show, experience the next b

Thank you to everyone who came to the show last ni

First real #curtaincall since March! It was so nic

A peek at tonight's FB livestream

PG-13 shenanigans with these beauties tonight at 8


Error: API requests are being delayed for this account. New posts will not be retrieved.